I’m excited about two books right now. I am in love with SHIVER and I just finished it. That’s my fiction fun read. The other tidbit I’m reading is THE TRANCE OF SCARCITY. It’s quite an interesting nonfiction read.
One of my habits is to keep a running stream of current and interesting books. At least one nonfiction and obviously I always have a few tempting fictions to devour. SHIVER is one of those tempting and unusual books from the YA paranormal genre, wolves in the backyard and all of that creepy stuff. It kept me reading and that’s not an easy task. Through Sam’s eyes…

I let her take the stack from my hand and watched her face light up as she flipped through the pictures, looking for one in particular. “There. That one’s my favorite of you.”

For a quote from THE TRANCE OF SCARCITY,

Once we’ve assigned a meaning…We then pass on our conclusions to our neighbors and children and students….then they too, treat the Story as though it’s the Truth. Now the Story may persist for centuries, generation after generation, as though chiseled into the side of a mountain.

SHIVER
THE TRANCE OF SCARCITY
The world is made up of stories, not atoms. Muriel Rukeyser

In a small town, not far away, lived a boy who could only paint. He could not chop wood, the ax was too heavy and it fell out of his hands. When he gardened, the plants always died. The cows ran from him and afterwards would only give spoiled milk. He could not weave or spin. The yarn would always tangle around his fingers.

So his family and the people of the town decided to leave him alone to do what he really liked to do.
The boy who could only paint loved to paint. He would often paint pictures of children playing and pictures of parents smiling while watching their children. He would paint with blues and greens, browns and pinks too. There would be kites in his paintings with blazing colors as they soared high in the bright blue sky. There were balloons and parades and fairs with dancing and fun everywhere.

In the middle of the town there was a wall that had a picture on it. A picture of destruction, war and gloom. A prophet had come through the town one day and predicted war, destruction and a sad end for the town and its people. The town’s people believed the prophet – he was a very wise man. They trusted this man who spoke great wonders and painted them on their wall. Believing the prophet’s tale, they busied themselves working hard to secure their town from unknown horrors. Walls were built, towers for storage and other strong fortresses for safety were made. The town stored food and clothing for such a dire day ahead. Not knowing when or how that sad day would come they worked harder so all their hard work wouldn’t be lost.

Now on a very normal day, as the people ran and busied themselves with their work, the young boy took his paint and brushes, looking for something to paint. His family had finally quit trying to make him useful, so he was alone. He walked into the town, looked around and spotted his next place to paint. First he took out blue, a nice soft blue. He covered that sad picture on the old wall. Green was next. His trees were green and they were strong. Brown was for the trunks and the roots that grew into the ground. He painted a sun and some birds and a boy with a wide smile.

One by one the town’s people stopped what they were doing. The man with a wagon load of corn, the lady with her milk cows, even the girl with a basket, full of eggs, stopped to see what the boy had done. As the crowd gathered around, they didn’t know what to think. Should they be angry with the boy who could only paint? He’d destroyed the prophet’s work. But no one could quite remember, what had been on the wall before. One gentleman thought it had been a building. A young girl remembered a crow. Out of all the people no one remembered the prophet’s message.

One lone man walked towards the boy, took the paintbrush from the boy’s hand and grabbed the small can of paint. With tears in his eyes, he walked towards the wall of doom and destruction, dipped the brush into the blue paint, then added his paint to the newly painted wall. One by one the people came forward and painted a spot onto the wall while the boy who could only paint now could only watch.

The universe is made up of stories, not atoms…Muriel Rukeyser. What is your story?

This is something I was given a few years back. Hopefully it will help you as it has me. These are stages that our world has gone through. We are now on the path of light. Tell me what you think.

The Path of Love [praise God]
Love the LORD your God- Him only shall you serve (worship, applaud).

The Path of Righteousness [lay down distractions, simplify]
Keep your feet and steps on the truth, the truth of God’s love and kindness. Keep your way free of snares of evil, seeking your own way and your own pleasures. Know your God. He is Holy.

The Path of Freedom [surrender will & desires]
This path comes only from complete and utter surrender. No other way to freedom. Take up your cross (accept your death and pain). Forget your pleasures and rights, then you’ll know freedom. All. From fear, worry, strife, disorder.

The Path of Light
Light travels faster than sound. Always conquers darkness. Never can darkness be turned on. Only light. Light causes shadows to flee. Light routs the enemy. Leave on the light. Keep your lamps burning. Always. Never turn them off. Never give me only half of your soul and leave another part for yourself reserved.
Let me be your restraint. Let me be your fasting. Let me be your God. 100%. No less. It’s all or nothing. There can be no other way. Wholly. Fully. Passion. Fire. Raging currents of waters. When you plunge in, then the rapids take you where you need to go. You do no work, no effort. Follow my paths. Find your life only in me. Lay down your measly life. Pick up your abundance in me. Keep back a reserve and I will spit you out. Then we’ll have to start again.

This is from the writer of “Formerly Hot”

This is the lighter side of being not so young. I really wish I had her good humor about it. And I do have to check out this book. Looks to be funny!!

Have a wonderful day everyone!

This should wake you up!

I LOVE this video. Such great energy. Creation at it’s best.

Starting February 15th, at the beginning of the Chinese Year of the TIGER, I am the new Lead at my office. And I am super excited about it.

When we are born, all of our surroundings and our family, with all of its miscellaneous people, are inherited. The fixtures, like Uncle Jerry’s pipe smoking and Grampa’s overalls, are all there. There is so much to learn when you are young that you cope as best you can. You try to understand. Why is Mom frowning at you and will she stop and give you another cookie if you smile at her? There isn’t time in life to sort through all of the behaviors of your family. You don’t know enough about God or Love or Traditions to analyze and sort through them.

I have decided that when I move into my new desk this Chinese New Year, that I will keep the items I need. I will thoughtfully toss the useless ones. I will try to place in my life the things or people I really want to be there. And I will ask for what I need, because I am here for a purpose.

This is my latest project. Short story or Novel…hmmm. I’m not sure yet. Tell me what you think.

The saloon was dark. The shadow Kate cast on the floor as she stood in the open doorway was swallowed when she entered the room and walked to the bar. Her hand reached to touch the mahogany wood. Dust accumulated around her fingertips as she caressed the bar’s smooth surface. Once pleasure was drunk here. Now it seemed as if time stood still. Like a time before there was time. The moment before creation began. Before the spark of life, before the first breath. But she was just being melancholy.
She whispered his name. The name of the one that brought her here. Jake. He wasn’t here, nor would he ever be again. He had lay dead here. In a pool of his own blood, from a fight of his own making. This was his place and she meant to have it.
Kate blew, scattering the dust from her fingers. Life would come. His life would flow back into this building even if she had to bring him back from the dead.
She clenched her fist, her knuckles raked against the bar’s dusty surface.
This place would stand. Not in memory of his name. No. His name held no honor. But in memory of his promise and the faith she had held in a man who once was to be her husband. With one sweep of her hand she removed the dust of a lifetime to begin another. Her own. 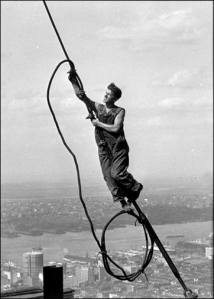 They say that nothing worth doing comes easily. And if something doesn’t scare the heck out of you, it probably didn’t mean much to you anyway.

Blogging and airing your thoughts when you know that people are reading is an incredible high. The reason most writer’s bare all is because of that high. To put your imaginations on paper and have someone critique them gives a feeling of vulnerableness to some, but for some of us, that’s exactly what makes it fun.

The greatest high is to expose the nerve of the masses. When you write aloud what others are afraid to say, it validates your life. The worst times leave you face down in the pigpen. Standing up, you spit and wipe the mud from your eyes. Ah! The pure joy of stench. Not all days are acclamation and pats on the back.