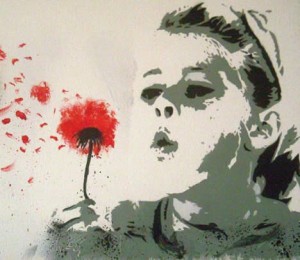 Recently I ran into a brick wall. I felt I couldn’t bust through. I had ideas, but they just hung out in the air. Pen to paper. Fingers to the keyboard. Where to start? Frustrating. This has been my struggle the last few months.

Back in my junior high days, there was a group from the wrestling team in my history class. They were often cutting up before the class started, before the teacher came into the room. Now, I knew what a full-nelson and a half-nelson hold were. I was familiar with martial arts and wrestling in general. My two older brothers were excellent teachers of how to remove yourself from holds and better still of how not to become entangled.

These three boys in class demonstrated something which shocked me. One guy would hold another wrestler up by gripping him around the neck, cutting off the blood flow. At first, I didn’t believe it was real. The guy fainted. Blacked completely out. Teen boys don’t faint. He’s joking around–right? They did it again to demonstrate. WTF. And then the teacher walked into the room. The chattering of 30 teenagers hushed to a whisper.

They were using a modified choke hold. And the wrestlers got high from the choke out. It became a tough guy competition and a then a demonstration to show what they knew. It was even an “I’ll hold you against the wall by the throat thing” until you pass out. Which is what happened and they’d get up and laugh it off.

That’s what I did to myself. Accidently. Only it wasn’t a real choke hold, just in the mad panic of getting too much done I dropped my writing. I quit editing my book. I had ideas, but I choked. I couldn’t seem to get enough air between my crazed thoughts. “Not enough time,” “that’s a dumb idea,” “later,” “everyone else has done that,” you’re a moron.” I choked.

Like those wrestlers, I’m getting back up and laughing it off. I relaxed the choke hold. I let the events pass that held me captive. One by one the stressors left. One more important thing I’ve done is to receive guidance. I’ve had therapy before, and it helped. This time I’d been thinking about having a life coach and I still might. What I did this time was order some coaching online that fit my specific needs. It has helped me tremendously. Maybe that’s what we all need, a little help, someone to nudge us in the right direction.

I think everything will be alright.